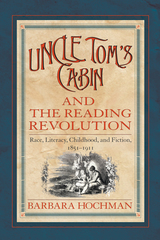 "Uncle Tom's Cabin" and the Reading Revolution explores a transformation in the cultural meaning of Stowe’s influential book by addressing changes in reading practices and a shift in widely shared cultural assumptions. These changes reshaped interpretive conventions and generated new meanings for Stowe’s text in the wake of the Civil War. During the 1850s, men, women, and children avidly devoured Stowe’s novel. White adults wept and could not put the book down, neglecting work and other obligations to complete it. African Americans both celebrated and denounced the book. By the 1890s, readers understood Uncle Tom’s Cabin in new ways. Prefaces and retrospectives celebrated Stowe’s novel as a historical event that led directly to emancipation and national unity. Commentaries played down the evangelical and polemical messages of the book. Illustrations and children’s editions projected images of entertaining and devoted servants into an open-ended future. In the course of the 1890s, Uncle Tom’s Cabin became both a more viciously racialized book than it had been and a less compelling one. White readers no longer consumed the book at one sitting; Uncle Tom’s Cabin was now more widely known than read. However, in the growing silence surrounding slavery at the turn of the century, Stowe’s book became an increasingly important source of ideas, facts, and images that the children of ex-slaves and other free-black readers could use to make sense of their position in U.S. culture.
AUTHOR BIOGRAPHY
Barbara Hochman is professor in the Department of Foreign Literatures and Linguistics at Ben-Gurion University of the Negev, Israel, and author of Getting at the Author: Reimagining Books and Reading in the Age of American Realism (University of Massachusetts Press).