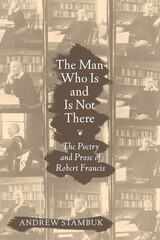 Robert Francis (1901–1987), the author of eight volumes of poetry, an autobiography, a book of fiction, essays on poetry, and a reminiscence of Robert Frost, lived for most of his career on the outskirts of Amherst, Massachusetts, devoting himself to Yankee simplicity and self-renunciation derived from his reading of Thoreau. His preference for solitude and disinclination to write about or promote himself account for the elusiveness of his persona in his prose and poetry.

This book charts how Francis developed and elaborated this persona through distanced self-portraits in prose and through poems that both reveal and conceal the self of the poet. Folded into the study are discussions of Francis's pastoralism, his affinities with Emerson and Thoreau, his experimentation with new poetic forms, his protest against the Vietnam War and environmental despoliation, his homoeroticism, and a comparison of his poetry with that of Robert Frost. The book also explores Francis's characteristic attitude, figured as "hovering," where his speaker is both subject and object, writing about himself while inhabiting the role of detached observer.

Complementing the emphasis on Francis's elusiveness, Andrew Stambuk offers readings of his poems attentive to aesthetic qualities that give them their particular reticence. Stambuk's sensitive evaluations underscore that Francis is a craftsman of intricate precisions whose work speaks to contemporary political and global concerns.
AUTHOR BIOGRAPHY
Andrew Stambuk teaches English at Hofstra University.