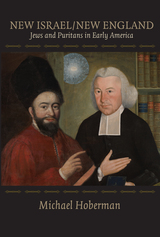 The New England Puritans' fascination with the legacy of the Jewish religion has been well documented, but their interactions with actual Jews have escaped sustained historical attention. New Israel/New England tells the story of the Sephardic merchants who traded and sojourned in Boston and Newport between the mid-seventeenth century and the era of the American Revolution. It also explores the complex and often contradictory meanings that the Puritans attached to Judaism and the fraught attitudes that they bore toward the Jews as a people.

More often than not, Michael Hoberman shows, Puritans thought and wrote about Jews in order to resolve their own theological and cultural dilemmas. A number of prominent New Englanders, including Roger Williams, Increase Mather, Samuel Sewall, Benjamin Colman, Cotton Mather, Jonathan Edwards, and Ezra Stiles, wrote extensively about post-biblical Jews, in some cases drawing on their own personal acquaintance with Jewish contemporaries.

Among the intriguing episodes that Hoberman investigates is the recruitment and conversion of Harvard's first permanent instructor of Hebrew, the Jewish-born Judah Monis. Later chapters describe the ecumenical friendship between Newport minister Ezra Stiles and Haim Carigal, an itinerant rabbi from Palestine, as well as the life and career of Moses Michael Hays, the prominent freemason who was Boston's first permanently established Jewish businessman, a founder of its insurance industry, an early sponsor of the Bank of Massachusetts, and a personal friend of Paul Revere.
AUTHOR BIOGRAPHY
Michael Hoberman is associate professor of English and folklore at Fitchburg State University and author of How Strange It Seems: The Cultural Life of Jews in Small-Town New England (University of Massachusetts Press, 2008).