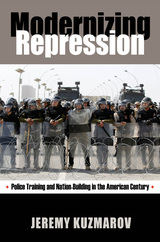 As American troops became bogged down first in Iraq and then Afghanistan, a key component of U.S. strategy was to build up local police and security forces in an attempt to establish law and order. This approach, Jeremy Kuzmarov shows, is consistent with practices honed over more than a century in developing nations within the expanding orbit of the American empire. From the conquest of the Philippines and Haiti at the turn of the twentieth century through Cold War interventions and the War on Terror, police training has been valued as a cost-effective means of suppressing radical and nationalist movements, precluding the need for direct U.S. military intervention and thereby avoiding the public opposition it often arouses.

Unlike the spectacular but ephemeral pyrotechnics of the battlefield, police training programs have had lasting consequences for countries under the American imperial umbrella, fostering new elites, creating powerful tools of social control, and stifling political reform. These programs have also backfired, breeding widespread resistance, violence, and instability—telltale signs of "blowback" that has done more to undermine than advance U.S. strategic interests abroad.
AUTHOR BIOGRAPHY
Jeremy Kuzmarov is Jay P. Walker Assistant Professor of History at the University of Tulsa and author of The Myth of the Addicted Army: Vietnam and the Modern War on Drugs (University of Massachusetts Press, 2009). Listen to a radio interview of Kuzmarov at http://publicradiotulsa.org/post/police-training-and-nation-building-american-century