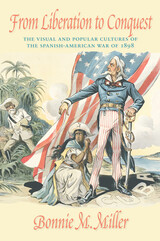 The American people overwhelmingly supported the nation's entry into the Spanish-American War of 1898, which led to U.S. imperial expansion into the Caribbean and Pacific. In this book, Bonnie M. Miller explores the basis of that support, showing how the nation's leading media makers—editorialists, cartoonists, filmmakers, photographers, and stage performers—captured the public's interest in the Cuban crisis with heart-rending depictions of Cuban civilians, particularly women, brutalized by bloodthirsty Spanish pirates.

Although media campaigns initially advocated for the United States to step in to rescue Cuba from the horrors of colonial oppression, the war ended just months later with the U.S. acquisition of Spain's remaining empire, including Cuba, Puerto Rico, Guam, and the Philippines. President William McKinley heeded the call for war, with the American people behind him, and then proceeded to use the conflict to further his foreign policy agenda of expanding U.S. interests in the Caribbean and Far East.

Miller examines the shifting media portrayals of U.S. actions for the duration of the conflict, from liberation to conquest. She shows how the media capitalized on the public's thirst for drama, action, and spectacle and adapted to emerging imperial possibilities. Growing resistance to American imperialism by the war's end unraveled the consensus in support of U.S policy abroad and produced a rich debate that found expression in American visual and popular culture.
AUTHOR BIOGRAPHY
Bonnie M. Miller is assistant professor of American studies at the University of Massachusetts Boston.