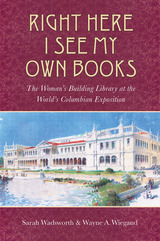 On May 1, 1893, the World's Columbian Exposition in Chicago opened its gates to an expectant public eager to experience firsthand its architectural beauty, technological marvels, and vast array of cultural treasures gathered from all over the world. Among the most popular of the fair's attractions was the Woman's Building, a monumental exhibit hall filled with the products of women's labor—including more than 8,000 volumes of writing by women. Right Here I See My Own Books examines the progress, content, and significance of this historic first effort to assemble a comprehensive library of women's texts.

By weaving together the behind-the-scenes story of the library's formation and the stories between the covers of books on display, Wadsworth and Wiegand firmly situate the Woman's Building Library within the historical context of the 1890s. Interdisciplinary in approach, their book demonstrates how this landmark collection helped consolidate and institutionalize women's writing in conjunction with the burgeoning women's movement and the professionalization of librarianship in late nineteenth-century America.

Americans in this period debated a wide range of topics, including women's rights, gender identity, racial politics, nationalism, regionalism, imperialism, and modernity. These debates permeated the cultural climate of the Columbian Exposition. Wadsworth and Wiegand's book illuminates the range and complexity of American women's responses to these issues within a public sphere to which the Woman's Building provided unprecedented access.
AUTHOR BIOGRAPHY
Sarah Wadsworth is associate professor of English at Marquette University and author of In the Company of Books: Literature and Its "Classes" in Nineteenth-Century America (University of Massachusetts Press, 2006). Wayne A. Wiegand is F. William Summers Professor of Library and Information Studies Emeritus at Florida State University and author, most recently, of Main Street Public Library: Community Places and Reading Spaces in the Rural Heartland, 1876-1956.