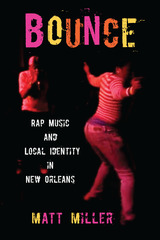 Over the course of the twentieth century, African Americans in New Orleans helped define the genres of jazz, rhythm and blues, soul, and funk. In recent decades, younger generations of New Orleanians have created a rich and dynamic local rap scene, which has revolved around a dance-oriented style called "bounce."

Hip-hop has been the latest conduit for a "New Orleans sound" that lies at the heart of many of the city's best-known contributions to earlier popular music genres. Bounce, while globally connected and constantly evolving, reflects an enduring cultural continuity that reaches back and builds on the city's rich musical and cultural traditions.

In this book, the popular music scholar and filmmaker Matt Miller explores the ways in which participants in New Orleans's hip-hop scene have collectively established, contested, and revised a distinctive style of rap that exists at the intersection of deeply rooted vernacular music traditions and the modern, globalized economy of commercial popular music. Like other forms of grassroots expressive culture in the city, New Orleans rap is a site of intense aesthetic and economic competition that reflects the creativity and resilience of the city's poor and working-class African Americans.
AUTHOR BIOGRAPHY
Matt Miller completed his PhD at Emory University, where he continues to teach American Studies. He was codirector of the documentary film Ya Heard Me (2008), presenting the history of bounce music and bounce artists. Matt Miller has a blog http://mattmillerbounce.blogspot.com with music tracks for each of the chapters in his book.
REVIEWS
-- Jeffrey Melnick, author of 9/11 Culture and coeditor of American Popular Music: New Approaches to the Twentieth Century