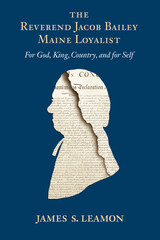 This book tells the story of the Reverend Jacob Bailey, a missionary preacher for the Church of England in the frontier town of Pownalborough (now Dresden), Maine, who refused to renounce allegiance to King George III during the American War of Independence. Relying largely on Bailey's unpublished journals and voluminous correspondence, James S. Leamon traces Bailey's evolution from his rustic background through his Harvard education and subsequent career as a teacher, Congregational minister, and missionary preacher for the Church of England. Along the way, Bailey absorbed many of the intellectual currents of the Enlightenment, but also the more traditional conviction that family, society, religion, and politics, like creation itself, should be orderly and hierarchal. Such beliefs led Bailey to oppose the Revolution as unnatural, immoral, and doomed to fail.

Reverend Bailey's persistence in praying for the king and his refusal to publicize the Declaration of Independence from his Pownalborough pulpit aroused hostilities that drove him and his family to the safety of Nova Scotia. There, in exile, Bailey devoted himself to assisting fellow refugees while defending himself from others. During this time, he wrote almost obsessively: poems, dramas, novels, histories. Though few were ever completed, and even fewer published, in one way or another most of his writings depicted the trauma he underwent as a loyalist.

Leamon's study of the Reverend Jacob Bailey depicts the complex nature and burdens of one person's loyalism while revealing much about eighteenth-century American life and culture.
AUTHOR BIOGRAPHY
James S. Leamon is professor of history emeritus at Bates College and author of Revolution Downeast: The War for American Independence in Maine (University of Massachusetts Press).