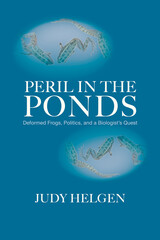 Peril in the Ponds tells the story of a government biologist's investigation into the mystery of deformed frogs, an epidemic that grew during the 1990s and continues today. It provides an inside view of a highly charged environmental issue that aroused the attention of the public and the media and sparked controversies among scientists, politicians, and government agencies.

By the 1990s, wetlands across the United States were endangered from pollution and decades of drainage to convert them into farmland and urban developments. But when deformed frogs—many with missing legs or eyes, footless stumps, or misshapen jaws—began to emerge from Minnesota wetlands, alarm bells went off. What caused such deformities? Pollution? Ultraviolet rays? Biological agents? And could the mysterious cause also pose a threat to humans?

Judy Helgen writes with passionate concern about vulnerable frogs and wetlands as she navigates through a maze of inquisitive media and a reluctant government agency. She reports on the complexity of a growing catastrophe for frogs and broadens the issue as she researches and meets with scientists from around the world. She affirms the importance of examining aquatic life to understand pollution and the need to rescue our remaining wetlands. She also shares the fears expressed by the teachers, students, and other citizens who found these creatures, sensed a problem, and looked to her for answers. Ultimately, this is a story about the biological beauty of wetlands and our need to pay attention to the environment around us.
AUTHOR BIOGRAPHY
Judy Helgen spent many years as a state government research scientist in biological monitoring at the Minnesota Pollution Control Agency, after earning a PhD in zoology from the University of Minnesota. Since retiring from the MPCA, she has taught at Metropolitan State University and was lead author of the Sierra Club report Restoring Water Quality Certification in Minnesota. For more information on Helgen's work, please see her website: http://www.judyhelgen.com/