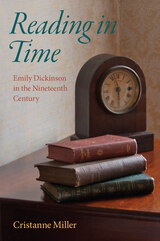 This book provides new information about Emily Dickinson as a writer and new ways of situating this poet in relation to nineteenth-century literary culture, examining how we read her poetry and how she was reading the poetry of her own day. Cristanne Miller argues both that Dickinson's poetry is formally far closer to the verse of her day than generally imagined and that Dickinson wrote, circulated, and retained poems differently before and after 1865. Many current conceptions of Dickinson are based on her late poetic practice. Such conceptions, Miller contends, are inaccurate for the time when she wrote the great majority of her poems.

Before 1865, Dickinson at least ambivalently considered publication, circulated relatively few poems, and saved almost everything she wrote in organized booklets. After this date, she wrote far fewer poems, circulated many poems without retaining them, and took less interest in formally preserving her work. Yet, Miller argues, even when circulating relatively few poems, Dickinson was vitally engaged with the literary and political culture of her day and, in effect, wrote to her contemporaries. Unlike previous accounts placing Dickinson in her era, Reading in Time demonstrates the extent to which formal properties of her poems borrow from the short-lined verse she read in schoolbooks, periodicals, and single-authored volumes. Miller presents Dickinson's writing in relation to contemporary experiments with the lyric, the ballad, and free verse, explores her responses to American Orientalism, presents the dramatic lyric as one of her preferred modes for responding to the Civil War, and gives us new ways to understand the patterns of her composition and practice of poetry.
AUTHOR BIOGRAPHY
Cristanne Miller is Edward H. Butler Professor of Literature and chair of the Department of English at the University of Buffalo. Her many books include Emily Dickinson: A Poet's Grammar and The Emily Dickinson Handbook, which she coedited.For a podcast interview with Miller, produced by the University of Buffalo, please see http://www.youtube.com/watch?v=moDbSfz4x3o.