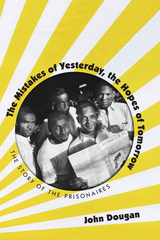 Early in the morning on June 1, 1953, five African American men boarded a van to make the 200-mile trip from Nashville to Memphis for a daylong recording session at the legendary Sun Studios, to be overseen by Sun founder Sam Phillips. One of the two tracks cut that day, "Just Walkin' in the Rain," would go on to become a regional R&B hit, Sun Records' biggest record of the pre-Elvis era. It would, however, be the group's only hit. They were the Prisonaires, a vocal quintet who had honed their skills while inmates at the Tennessee State Penitentiary in Nashville.

In this book, John Dougan tells the story of the Prisonaires, their hit single, and the afterlife of this one remarkable song. The group and the song itself represent a compelling concept: imprisoned men using music as a means of cultural and personal survival. The song was re-recorded by white singer Johnnie Ray, who made it a huge hit in 1956. Over the years, other singers and groups would move the song further away from its origins, recasting the deep emotions that came from creating music in a hostile, controlled environment.

The story of the Prisonaires, for all of its triumphs, reflects the disappointment of men caught in a paradoxical search for personal independence while fully cognizant of a future consigned to prison. Their brief career and the unusual circumstances under which it flourished sheds light on the harsh realities of race relations in the pre–Civil Rights South. The book also provides a portrait of Nashville just as it was gaining traction as a nationally recognized music center.
AUTHOR BIOGRAPHY
John Dougan is professor of music business and popular music studies in the Department of Recording Industry at Middle Tennessee State University and author of The Who Sell Out.