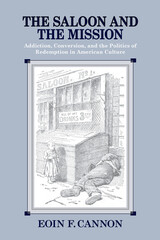 Since the middle of the nineteenth century, sobriety movements have flourished in America during periods of social and economic crisis. From the boisterous working-class temperance meetings of the 1840s to the quiet beginnings of Alcoholics Anonymous in the 1930s, alcoholics have banded together for mutual support. Each time they have developed new ways of telling their stories, and in the process they have shaped how Americans think about addiction, the self, and society.

In this book Eoin Cannon illuminates the role that sobriety movements have played in placing notions of personal and societal redemption at the heart of modern American culture. He argues against the dominant scholarly perception that recovery narratives are private and apolitical, showing that in fact the genre's conventions turn private experience to public political purpose. His analysis ranges from neglected social reformer Helen Stuart Campbell's embrace of the "gospel rescue missions" of postbellum New York City to William James's use of recovery stories to consider the regenerative capabilities of the mind, to writers such as Upton Sinclair and Djuna Barnes, who used this narrative form in much different ways.

Cannon argues that rather than isolating recovery from these realms of wider application, the New Deal–era Alcoholics Anonymous refitted the "drunkard's conversion" as a model of selfhood for the liberal era, allowing for a spiritual redemption story that could accommodate a variety of identities and compulsions. He concludes by considering how contemporary recovery narratives represent both a crisis in liberal democracy and a potential for redemptive social progress.
AUTHOR BIOGRAPHY
Eoin F. Cannon, head speechwriter for Boston's mayor, Martin J. Walsh, is former lecturer and assistant director of Studies for History and Literature at Harvard.