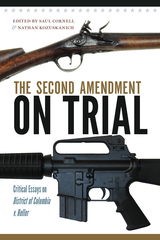 On the final day of its 2008 term, a sharply divided U.S. Supreme Court issued a 5-to-4 decision striking down the District of Columbia’s stringent gun control laws as a violation of the Second Amendment. Reversing almost seventy years of settled precedent, the high court reinterpreted the meaning of the “right of the people to keep and bear arms” to affirm an individual right to own a gun in the home for purposes of self-defense. The landmark ruling not only opened a new chapter in the contentious history of gun rights and gun control but also revealed both the strengths and problems of originalist constitutional theory and jurisprudence. This volume brings together some of the best scholarship on the Heller case, with essays by legal scholars and historians representing a range of ideological viewpoints and applying different interpretive frameworks. Following the editors’ introduction, which describes the issues involved and the arguments on each side, the essays are organized into four sections. The first includes two of the most important historical briefs filed in the case, while the second offers different views of the role of originalist theory. Section three presents opposing interpretations of the ruling and its relationship to modern constitutional doctrine. The final section explores historical research post-Heller, including new findings on patterns of gun ownership in colonial and Revolutionary America. In addition to the editors, contributors include Nelson Lund, Joyce Lee Malcolm, Jack Rakove, Reva B. Siegel, Cass R. Sunstein, Kevin M. Sweeney, and J. Harvie Wilkinson III.
AUTHOR BIOGRAPHY
Saul Cornell is Paul and Diane Guenther Chair in American History at Fordham University. Nathan Kozuskanich is associate professor of history at Nipissing University.