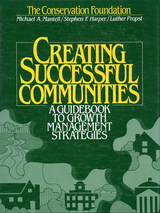 Creating Successful Communities is a practical compendium of techniques for effective land use and growth management. It offers a framework for land-use decisionmaking and growth management: techniques for protecting key resources such as agricultural land, open space, historic and cultural structure, aesthetics, and rivers and wetlands as well as ways to organize effectively. The companion Resource Guide provides detailed information on topics covered in I>Creating Successful Communities.