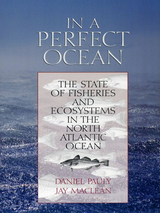 Recent decades have been marked by the decline or collapse of one fishery after another around the world, from swordfish in the North Atlantic to orange roughy in the South Pacific. While the effects of a collapse on local economies and fishing-dependent communities have generated much discussion, little attention has been paid to its impacts on the overall health of the ocean's ecosystems.

In a Perfect Ocean: The State of Fisheries and Ecosystems in the North Atlantic Ocean presents the first empirical assessment of the status of ecosystems in the North Atlantic ocean. Drawing on a wide range of studies including original research conducted for this volume, the authors analyze 14 large marine ecosystems to provide an indisputable picture of an ocean whose ecology has been dramatically altered, resulting in a phenomenon described by the authors as "fishing down the food web." The book:

An original and powerful series of maps and charts illustrate where the effects of overfishing are the most pronounced and highlight the interactions among various factors contributing to the overall decline of the North Atlantic's ecosystems.

This is the first in a series of assessments by the world's leading marine scientists, entitled "The State of the World's Oceans." In a Perfect Ocean: The State of Fisheries and Ecosystems in the North Atlantic Ocean is a landmark study, the first of its kind to make a comprehensive, ecosystem-based assessment of the North Atlantic Ocean, and will be essential reading for policymakers at the state, national, and international level concerned with fisheries management, as well for scientists, researchers, and activists concerned with marine issues or fishing and the fisheries industry.

Daniel Pauly is the principal investigator for the Sea Around Us Project, sponsored by the Pew Charitable Trusts and based at the Fisheries Centre of the University of British Columbia in Vancouver. Jay Maclean is an independent writer and marine biologist based in the Philippines.