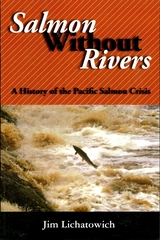 "Fundamentally, the salmon's decline has been the consequence of a vision based on flawed assumptions and unchallenged myths.... We assumed we could control the biological productivity of salmon and 'improve' upon natural processes that we didn't even try to understand. We assumed we could have salmon without rivers." --from the introduction From a mountain top where an eagle carries a salmon carcass to feed its young to the distant oceanic waters of the California current and the Alaskan Gyre, salmon have penetrated the Northwest to an extent unmatched by any other animal. Since the turn of the twentieth century, the natural productivity of salmon in Oregon, Washington, California, and Idaho has declined by eighty percent. The decline of Pacific salmon to the brink of extinction is a clear sign of serious problems in the region.In Salmon Without Rivers, fisheries biologist Jim Lichatowich offers an eye-opening look at the roots and evolution of the salmon crisis in the Pacific Northwest. He describes the multitude of factors over the past century and a half that have led to the salmon's decline, and examines in depth the abject failure of restoration efforts that have focused almost exclusively on hatcheries to return salmon stocks to healthy levels without addressing the underlying causes of the decline. The book: describes the evolutionary history of the salmon along with the geologic history of the Pacific Northwest over the past 40 million years considers the indigenous cultures of the region, and the emergence of salmon-based economies that survived for thousands of years examines the rapid transformation of the region following the arrival of Europeans presents the history of efforts to protect and restore the salmon offers a critical assessment of why restoration efforts have failed Throughout, Lichatowich argues that the dominant worldview of our society -- a worldview that denies connections between humans and the natural world -- has created the conflict and controversy that characterize the recent history of salmon; unless that worldview is challenged and changed, there is little hope for recovery. Salmon Without Rivers exposes the myths that have guided recent human-salmon interactions. It clearly explains the difficult choices facing the citizens of the region, and provides unique insight into one of the most tragic chapters in our nation's environmental history.
AUTHOR BIOGRAPHY

Jim Lichatowich has been a fisheries scientist for twenty-nine years, working for most of that time in salmon management and research in Oregon and Washington. He is a member of three independent teams of scientists investigating the salmon crisis, and has written numerous scientific and technical papers on the history, current status, and future prospects of salmon. His essays have appeared in a variety of publications including Trout magazine, Peninsula magazine, Riverkeeper, and Shirkin Comment.

REVIEWS
"Lichatowich provides a critical perspective on salmon hatchery successes and failures, and his book of captivating stories provides a fascinating, readable, and chilling wake-up call to how humans have mismanaged their natural heritage."
— CHOICE

Epilogue: Building A New Salmon Culture
Appendix A: Classification Of Anadromous Forms Of Salmon
Appendix B: Comparison Of The Life Histories Of Seven Species Of Pacific Salmon And Trout
Appendix C: Geologic Epochs Mentioned In The Text
Endnotes
Bibliography
Index