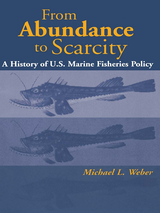 The management of coastal and ocean fisheries is highly contentious. Industry interests focus on maximizing catches while conservationists and marine scientists have become increasingly concerned about dramatic declines in fish stocks and the health of ecosystems. Besides attempting to mediate among these interests, government agencies have pursued their own agendas, which have often lagged behind shifts in scientific understanding and public attitudes about the productivity of the oceans and uses of marine wildlife.From Abundance to Scarcity examines the historical evolution of U.S. fisheries policy and institutions from the late 19th century to the present day, with an emphasis on changes since World War II. Based on archival research and interviews with dozens of key players in marine policymaking, it traces the thinking, legislation, mandates, and people that have shaped the various agencies governing fisheries in the United States. The book: discusses the development of federal programs in marine biological sciences and the evolution of scientific understanding about marine wildlife populations describes the work of federal fisheries programs in promoting the interests of the fishing industry considers the response of agencies to factors such as dam-building and coastal development that have led to increased pollution and habitat loss examines the shifts in understanding and values that underlie major legislation including the Marine Mammal Protection Act, the Endangered Species Act, the Magnuson-Stevens Act, and the Sustainable Fisheries Act examines the evolving relationship between federal agencies, the fishing industry, communities, and nongovernmental conservation organizations, with an eye toward future management practice From Abundance to Scarcity sheds light on the sets of interests that have shaped U.S. fisheries policy, lending historical depth to current debates and providing a fuller understanding of current laws and regulations, and administrative structures and mechanisms. It offers an insightful overview for professionals involved with fisheries management or the fishing industry, conservationists working on marine issues, and students and scholars of marine policy and affairs, environmental policy and law, or public policy and administration.
AUTHOR BIOGRAPHY

Michael Weber was vice president of programs for the Center for Marine Conservation for ten years and also served as special assistant to the director of the National Marine Fisheries Service; he now works as a freelance writer based in Redondo Beach, California. His books include The Wealth of Oceans (Norton, 1995) with Judith Gradwohl, and Fish, Markets and Fishermen (Island Press, 1999) with Suzanne Iudicello and Robert Wieland.