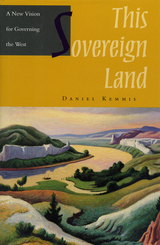 In the eight states of the interior West (Arizona, Colorado, Idaho, Montana, Nevada, New Mexico, Utah, and Wyoming), 260 million acres -- more than 48 percent of the land base -- are owned by the federal government and managed by its Washington, D.C.-based agencies. Like many other peoples throughout history who have bristled under the controlling hand of a remote government, westerners have long nursed a deep resentment toward our nation's capital. Rumblings of revolution have stirred for decades, bolstered in recent years by increasing evidence of the impossibility of a distant, centralized government successfully managing the West's widespread and far-flung lands.

In This Sovereign Land, Daniel Kemmis offers a radical new proposal for giving the West control over its land. Unlike those who wish to privatize the public lands and let market forces decide their fate, Kemmis, a leading western Democrat and committed environmentalist, argues for keeping the public lands public, but for shifting jurisdiction over them from nation to region. In place of the current centralized management, he offers a regional approach that takes into account natural topographical and ecological features, and brings together local residents with a vested interest in ensuring the sustainability of their communities. In effect, Kemmis carries to their logical conclusion the recommendations about how the West should be governed made by John Wesley Powell more than a century ago.

Throughout, Kemmis argues that the West no longer needs to be protected against itself by a paternalistic system and makes a compelling case that the time has come for the region to claim sovereignty over its own landscape. This Sovereign Land provides a provocative opening to a much-needed discussion about how democracy and ecological sustainability can go hand in hand, and will be essential reading for anyone interested in the West and western issues, as well as for all those concerned with place-based conservation, public lands management, bioregionalism, or related topics.

Daniel Kemmis is director of the Center for the Rocky Mountain West at The University of Montana in Missoula, Montana. He formerly served as minority leader and speaker of the Montana House of Representatives, and as mayor of Missoula. His books include Community and the Politics of Place (University of Oklahoma Press, 1990) and The Good City and the Good Life (Houghton Mifflin, 1995).

"Daniel Kemmis is a creative, innovative, 'outside-of-the-box' thinker who makes a persuasive argument for a radical cahnge that just might have you writing your Congressman when you finish the last chapter. " --Natural Resources Journal

Introduction: The Lay of the Land
Chapter 1. The Lost Trail
Chapter 2. Imperial Origins
Chapter 3. A Century of Rebellion
Chapter 4. The Decline of the Empire
Chapter 5. A Maturing Region
Chapter 6. A Homegrown Western Democracy
Chapter 7. An Irrepressible Conflict
Chapter 8. How the West Might Govern the West
Chapter 9. Realigning Western Politics