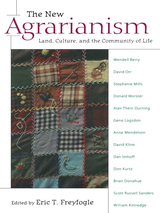 The engaging writings gathered in this new book explore an important but little-publicized movement in American culture -- the marked resurgence of agrarian practices and values in rural areas, suburbs, and even cities. It is a movement that in widely varied ways is attempting to strengthen society's roots in the land while bringing greater health to families, neighborhoods, and communities. The New Agrarianism vividly displays the movement's breadth and vigor, with selections by such award-winning writers as Wendell Berry, William Kittredge, Stephanie Mills, David Orr, Scott Russell Sanders, and Donald Worster.

As editor Eric Freyfogle observes in his stimulating and original introduction, agrarianism is properly conceived in broad terms, as reaching beyond food production to include a wide constellation of ideals, loyalties, sentiments, and hopes. It is a temperament and a moral orientation, he explains, as well as a suite of diverse economic practices -- all based on the insistent truth that people everywhere are part of the land community, as dependent as other life on its fertility and just as shaped by its mysteries and possibilities.

The writings included here have been chosen for their engaging narratives as well as their depiction of the New Agrarianism's broad scope. Many of the selections illustrate agrarian practitioners in action -- restoring prairies, promoting community forests and farms, reducing resource consumption, reshaping the built environment. Other selections offer pointed critiques of contemporary American culture and its market-driven, resource-depleting competitiveness. Together, they reveal what Freyfogle identifies as the heart and soul of the New Agrarianism: its yearning to regain society's connections to the land and its quest to help craft a more land-based and enduring set of shared values.

The New Agrarianism offers a compelling vision of this hopeful new way of living. It is an essential book for social critics, community activists, organic gardeners, conservationists, and all those seeking to forge sustaining ties with the entire community of life.

AUTHOR BIOGRAPHY
Eric T. Freyfogle is the author of Bounded People, Boundless Lands (Island Press, 1998), winner of the 1999 Adult Nonfiction Award of the Society of Midland Authors, and co-editor of For the Health of the Land (Island Press, 1999). He teaches natural-resources, property, and land-use law at the University of Illinois, Urbana-Champaign.
REVIEWS
"Here is a book to savor—flavorful and nutritious, it sticks to the mind's ribs. The 'New Agrarianism' is about Americans re-learning how to care for the land, and Eric Freyfogle has thoughtfully assembled a banquet of eloquent voices."
— Tony Hiss, author of "The Experience of Place"

"The New Agrarianism is a manifesto for the next generation of back-to-the-landers—one which doesn't want Monsanto, ConAgra, or Sysco to dictate what is in our diets or our gardens. Let it help make a thousand fields bloom again."
— Gary Nabhan, director of the NAU Center for Sustainable Environments and author

PART II. The Sirens of Conquest
Chapter 8. The Decline of the Apple \ Anne Mendelson
Chapter 9. The Competitive Edge \ Don Kurtz
Chapter 10. Owning It All \ William Kittredge
Chapter 11. The Wealth of Nature \ Donald Worster

Notes
Acknowledgments
About the Contributors
Index