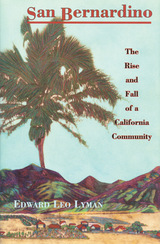 In the mid-1800s San Bernardino emerged as one of the largest settlements in southern California. It surpassed Pueblo de los Angeles and San Diego in grain and lumber yields and boasted a burgeoning cattle industry and promising wine vineyards. But as a Mormon commune–the farthest outpost in Brigham Young’s Rocky Mountain empire–the colony was threatened, and finally abandoned, in 1857 during the Utah war with the United States.

From the beginning, Young had misgivings about the colony. Particularly perplexing was the mix of atypical Latter-day Saints who gravitated there. Among these were ex-slave holders; inter-racial polygamists; horse-race gamblers; distillery proprietors; former mountain men, prospectors, and mercenaries; disgruntled Polynesian immigrants; and finally Apostle Amasa M. Lyman, the colony’s leader, who became involved in spiritualist seances.

Despite Young’s suspicions, when he issued the call to relocate to Utah, two-thirds of the city’s 3,000 residents dutifully obeyed, leaving behind their cumulative fortunes and a city stripped of its regional economic standing. Recounting this remarkable story, Edward Leo Lyman skillfully interweaves the most intriguing details about the setting and chain of events, emphasizing both the significance and irony of this diverse legacy.

AUTHOR BIOGRAPHY
Edward Leo Lyman is a professor of history at Victor Valley College in southern California. He is the author of Political Deliverance: The Mormon Quest for Utah Statehood and San Bernardino: The Rise and Fall of a California Community, as well as a short guidebook to Mormon Historical Sites in the San Bernardino Area. He has been published in Arizona and the West, Brigham Young University Studies, California History, Dialogue: A Journal of Mormon Thought, Idaho Yesterdays, Southern California Quarterly, and the Utah Historical Quarterly. He is co-authoring the forthcoming Millard County, Utah: A Centennial History.