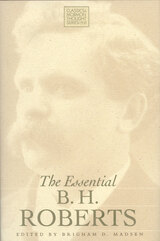 Although Brigham H. Roberts was an LDS general authority, he was by public consensus and his own admission an intellectual. Consequently, and due to the painfully earnest, meticulous way he approached any issue of consequence and his intimate familiarity with Western thought, he occasionally appeared to be knowingly contradictory. Readers are therefore left to judge whether he vacillated over time, tailored his message to the audience on a “milk-before-meat” principle, or was comfortable camouflaging his real intent in metaphor.

On one occasion Roberts defended the traditional Mormon view of the godhead—perfected men who “eat, drink … and procreate” as exalted mortals; another time he seemed less comfortable imposing limitations on a God who cannot be fixed to a single location, for whom Jesus was a mortal incarnation, and for whom the term “trinity” seemed more eloquent than the “presidency of heaven.”

His most famous and penetrating analysis focused on the Book of Mormon. In this collection Roberts discusses the mode of its translation, while stopping short of saying that God, who speaks to humans in their own language, could have authored the inconsistent grammar that appeared luminously in Joseph Smith’s seer stone. Instead he credits this to Smith’s own linguistic contribution, thereby preserving for God a fitting transcendence. Later Roberts went so far as to question the Book of Mormon’s historicity.

A final example of Roberts’s complexity: He proclaimed in public the perfect unity and harmony found at church conferences, but he privately castigated his colleagues for what he considered to be obstinance. He once asked what additional, irrational proposal “may occur to some genius” in the Quorum of the Twelve.

A paradox still, this feisty president of the church’s Seventies continues to provoke mixed and heated feelings, as expressed by a Scottish immigrant working in the First Presidency’s office who one day said to Roberts: “Aye, mon, the frankness of it. How dare you do it, mon?” But for those who are sincere and secure in their faith, Roberts can provide a delightfully rewarding journey. Consider just the following four, short excerpts from this compilation—two are originally from Roberts’s published works and two are from his personal letters:

“It is not given to mortal man always to walk upon that plane where the sunlight of God’s inspiration is playing upon him. Sometimes the servants of God speak merely from their human knowledge, influenced by passions; influenced by the interests of men, and by anger, and vexation. When they so speak, that is not likely to be the word of God. In any event it must be allowed by us that many unwise things were said in times past that did not possess the value of scripture, or anything like it; and it was not revelation.”

“What has become, in the church, of the principle that governments derive their just powers from the consent of the governed? Will it be enough to say that the consent of the governed can come later when nominations have been made by leaders? The procedure may be so, and the quorums thus ignored may silently submit, and the matter going on in a dull, gray, and sullen manner; but you will have no esprit de corps in the quorums; and young men of active minds will grow restive. Why not regard them as having some judgment, and right to have a voice in nominating those with whom they are to work?”

“So I say that when the churches turn to secular government to enforce religious doctrines and discipline, they abandon their legitimate sphere and enter one wholly repugnant to their principles. When churches thus abandon their confidence in the power of truth, they play havoc with their own authority.”

“My dear Bishop Nibley, let me commend you for the delicacy with which you can tell the poor ‘theorist’ to ‘get off the earth.’ I know not if you were born with such delicacy or have acquired it, but in either event it challenges one’s admiration. You write that ‘You (myself) are a theorist, while he (Senator-Apostle Smoot) is needed and has a place in the economy of things.’ That is decidedly good. There is but one thing more you could have suggested to my advantage; you might have indicated the particular location in oblivion where you would be willing for me to sit.”

Brigham Henry Roberts was born in England in 1857. Among his other achievements, he was president of the LDS First Quorum of Seventy and Assistant Church Historian. His numerous books include: (historical) A Comprehensive History of the Church, Joseph Smith: The Prophet-Teacher, The Life of John Taylor, Outlines of Ecclesiastical History, and (theological) A New Witness for God, the Mormon Doctrine of Deity, and the Seventy’s Course in Theology—all of which are considered authoritative, and for which Roberts earned the epithet, “Defender of the Faith.” He died in 1933.

AUTHOR BIOGRAPHY
Brigham D. Madsen is Professor Emeritus of History and past vice president of the University of Utah, recipient of a Distinguished Teacher of the Year Award, as well as the Distinguished Service Award from the Utah Academy of Sciences, Arts, and Letters. He is the author of Glory Hunter: A Biography of Patrick Edward Connor (Utah State Historical Society Best Military History Award), North to Montana! Jehus, Bullwhackers, and Mule Skinners on the Montana Trail (Westerners International Best Book Award), The Shoshoni Frontier and the Bear River Massacre (Westerners International Best Book Award), Studies of the Book of Mormon (John Whitmer Historical Association Best Book Award), and other volumes, including his own popular autobiography, Against the Grain: Memoirs of a Western Historian.