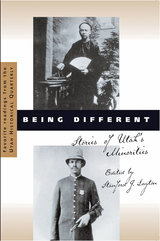 Ethnic studies can be full of surprises, pathos, and nostalgia, in Utah as elsewhere. In this anthology, fourteen gifted historians consider such issues as the collision of white settlers and Shoshones in northern Utah and the initial trouble with Salt Lake City residents when all-black troops were garrisoned at Forts Douglas and Duchesne.

The Mormon immigration was primarily of Yankee and British stock. Less advertised is the fact that it also included a sizeable number of Scandinavians who lent a distinctive, Old World flavor to the Sanpete area and by Polynesians who adapted their unique culture to the harsh realities of Skull Valley.

Peoples of other religions and nationalities followed with similarly colorful, energetic cultural contributions: the Italians and Greeks of Carbon and Emery Counties and the first Mexicans in and around Salt Lake City. There were short-lived colonizing efforts by Jewish settlers in central Utah and Japanese in Wasatch County.

In writing about and memorializing significant events surrounding immigrants’ lives and the day-to-day perseverance of pioneers of all nationalities, the fourteen contributors to this anthology offer fascinating details and unforgettable stories.