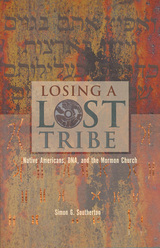 For the past 175 years, the Latter-day Saint Church has taught that Native Americans and Polynesians are descended from ancient seafaring Israelites. Recent DNA research confirms what anthropologists have been saying for nearly as many years, that Native Americans are originally from Siberia and Polynesians from Southeast Asia. In the current volume, molecular biologist Simon Southerton explains the theology and the science and how the former is being reshaped by the latter.

In the Book of Mormon, the Jewish prophet Lehi says the following after arriving by boat in America in 600 BCE:

Wherefore, I, Lehi, have obtained a promise, that inasmuch as those whom the Lord God shall bring out of the land of Jerusalem shall keep his commandments, they shall prosper upon the face of this land; and they shall be kept from all other nations, that they may possess this land unto themselves (2 Ne. 1:9).

AUTHOR BIOGRAPHY
Simon G. Southerton is Principal Research Scientist in the Applied Biotechnology and Genomics area of the Commonwealth Scientific laboratories (CSIRO) in Canberra, Australia. His Ph.D. is from the University of Sydney. He has published in New Phytologist, Plant Journal, Plant Molecular Biology, and Plant Physiology. He served an LDS mission to Melbourne in the 1980s.