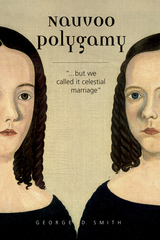 “This is a meticulously researched and skillfully written work on Mormon polygamy. The author does not take sides in this tangled web of theology and practice, but instead has produced what may well be the definitive work on polygamy. I highly recommend it.” —Linda King Newell, co-author, Mormon Enigma: Emma Hale Smith

“Nauvoo Polygamy is s a thorough investigation of sexual politics in the City of the Saints, the 1840s Mormon headquarters in the U.S. State of Illinois. Written with precision, clarity, and ease, it is a major contribution to Mormon history, groundbreaking in identifying the other polygamists who followed the lead of their prophet, Joseph Smith, in taking multiple partners.” —Klaus J. Hansen, Professor Emeritus of History, Queen’s University, Ontario

“If for no other reason, the inclusion of chapter 6 makes this book worth its price. The chapter quotes liberally from those like Elizabeth Ann Whitney and Bathsheba Smith who accepted polygamy rather easily, those like Jane Richards who accepted it only reluctantly, and those like Patty Sessions who found plural marriage almost unbearable. A bonus is chapter 9 which provides a concise historical overview of polygamous societies in Reformation Europe, touches on similar societies in America, and offers an extended discussion of Orson Pratt’s 1852 defense of plural marriage.” —Thomas G. Alexander, Professor Emeritus of History, Brigham Young University

“George Smith shows how many of the prophet’s followers embraced plural marriage during a period when the LDS Church was emphatically denying the practice … [and he tells this in] a lucid writing style.” —Daniel Walker Howe, Pulitzer Prize winning author of What Hath God Wrought: The Transformation of America, 1815-1848.

“An extremely important contribution to the history of polygamy … that allows us to see how Joseph Smith’s marriages fit into the context of his daily life.” —Todd M. Compton, author of In Sacred loneliness: The Plural Wives of Joseph Smith

AUTHOR BIOGRAPHY
George D. Smith is a graduate of Stanford and New York University. He is the editor of the landmark frontier diaries of one of the most prominent Mormon pioneers, An Intimate Chronicle: The Journals of William Clayton, and of Religion, Feminism, and Freedom of Conscience. He has published in Dialogue: A Journal of Mormon Thought, Free Inquiry, the  John Whitmer Historical Journal, Journal of Mormon History,Restoration Studies, and Sunstone. He has served on the boards of the Graduate Theological Union in Berkeley, the Kenyon Review, the Leakey Foundation, and National Public Radio.