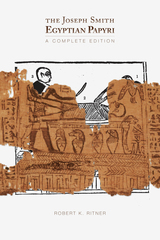 This book marks the publication of the first, full translation of the so-called Joseph Smith Egyptian papyri translated into English. These papyri comprise “The Breathing Permit of Hor,” “The Book of the Dead of Ta-Sherit-Min,” “The Book of the Dead Chapter 125 of Nefer-ir-nebu,” “The Book of the Dead of Amenhotep,” and “The Hypocephalus of Sheshonq,” as well as some loose fragments and patches. The papyri were acquired by members of the LDS Church in the 1830s in Kirtland, Ohio, and rediscovered in the mid-1960s in the Metropolitan Museum of Art in New York. They served as the basis for Joseph Smith’s “Book of Abraham,” published in Nauvoo, Illinois, in 1842 and later canonized.

As Robert K. Ritner, Professor of Egyptology at the Oriental Institute, University of Chicago, explains: “The translation and publication of the Smith papyri must be accessible not merely to Egyptologists but to non-specialists within and outside of the LDS religious community for whom the Book of Abraham was produced.” Dr. Ritner provides not only his own original translations but gives variant translations by other researchers to demonstrate better the “evolving process” of decipherment. He also includes specialized transliterations and his own informed commentary on the accuracy of past readings. “These assessments,” he notes, “are neither equivocal nor muted.” At the same time, they do not have a “partisan basis originating in any religious camp.”

The present volume includes insightful introductory essays by noted scholars Christopher Woods, Associate Professor of Sumerology, University of Chicago (“The Practice of Egyptian Religion at ‘Ur of the Chaldees’”), Marc Coenen, Egyptian Studies Ph. D., University of Leuven, Belgium  (“The Ownership and Dating of Certain Joseph Smith Papyri”), and H. Michael Marquardt, author of The Revelations of Joseph Smith: Text and Commentary (“Joseph Smith’s Egyptian Papers: A History”). It contains twenty-eight photographic plates, including color images of the primary papyri (with corrected alignment for Papyrus Joseph Smith 2) and other relevant items.

AUTHOR BIOGRAPHY
Robert K. Ritner, is a Professor of Egyptology at the Oriental Institute, University of Chicago