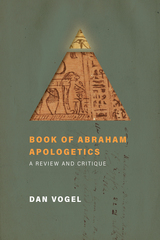 Said to have been dictated by Joseph Smith as a translation of an ancient Egyptian scroll purchased in Kirtland, Ohio, in 1835, the Book of Abraham may be Mormonism’s most controversial scripture. Decades of impassioned discussion began when about a dozen fragments of Smith’s Egyptian papyri, including a facsimile from the Book of Abraham, were found in the New York Metropolitan Museum in 1966. The discovery solved a mystery about the origin of the Egyptian characters that appear in the various manuscript copies of the Book of Abraham from 1835, reproduced from one of the fragments. Some LDS scholars devised arguments to explain what seemed to be clear evidence of Smith’s inability to translate Egyptian. In this book, Dan Vogel not only highlights the problems with these apologetic arguments but explains the underlying source documents in revealing detail and clarity.
AUTHOR BIOGRAPHY
Dan Vogel is the author of Joseph Smith: The Making of a Prophet, which won the Best Book Award from the Mormon History Association, and editor of the five-volume series,  Early Mormon Documents, recipient of Best Documentary awards from both the Mormon History Association and the John Whitmer Historical Association. His other works include, as author, Indian Origins and the Book of Mormon, Religious Seekers and the Advent of Mormonism; and, as editor, The Word of God: Essays on Mormon Scripture, a critical edition of Eber D. Howe’s Mormonism Unvailed, and the eight-volume History of Joseph Smith and The Church of Jesus Christ of Latter-day Saints: A Source- and Text-Critical Edition. He is co-editor, with Brent Lee Metcalfe, of American Apocrypha: Essays on the Book of Mormon. He lives in Ohio.