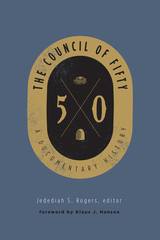 Mormon Church founder Joseph Smith had both millennial and temporal aspirations for the organization he called the Council of Fifty, named after the number of men who were intended to comprise it. Organized a few months before Smith’s death in June 1844, it continued under Brigham Young as a secret shadow government until 1851. Minutes from the earliest meetings are closed to researchers but contemporary accounts speak of a deliberative body preparing for Christ’s imminent reign. It also helped to sponsor Smith’s U.S. presidential bid and oversaw the exodus to present-day Utah.

One member downplayed the significance of this secret legislative body in 1849 as “nothing but a debating School.” On the contrary, a typical meeting included decisions regarding irrigation, fencing, and adobe housing, after which the group sang a song written by Parley P. Pratt: “Come ye sons of doubt and wonder; Indian, Moslem, Greek or Jew; … Be to all a friend and brother; Peace on Earth, good will to men.” Two weeks later, the council called for “blood to flow” to enforce its laws.

As the nineteenth century waned and the LDS Church moved toward the American mainstream, ending its emphasis on the imminent End of Days, there was no longer a need for a Church-managed municipal group destined to become the millennial world government. The council became irrelevant but survives today as a historical artifact available in fragmented documentary pieces which are presented here for the first time.
AUTHOR BIOGRAPHY
Jedediah S. Rogers is a research historian with Historical Research Associates in Missoula, Montana, a firm that provides archaeological, anthropological, and historical data for government and business projects. His PhD in American history is from Arizona State University; he is the editor of In the President’s Office: The Diaries of L. John Nuttall,1879-1892, which won the Evans Handcart Award from the USU Mountain West Center for Regional Studies and the Best Documentary Book Award from the Mormon History Association.