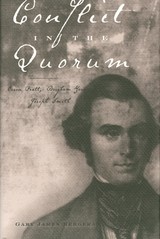 At a meeting of the LDS Quorum of the Twelve in 1860, one of the church’s senior apostles, Elder Heber C. Kimball, complained that “Brother Orson Pratt has withstood Joseph [Smith] and he has withstood Brother Brigham [Young] many times and he has done it tonight and it made my blood chill. It is not for you to lead [the prophet],” Kimball continued, “but to be led by him. You have not the power to dictate but [only] to be dictated [to].”

Whenever the quorum discussed Elder Pratt’s controversial sermons and writings and his streak of independent thinking, the conversation could become heated. As documented by Gary James Bergera in this surprisingly suspenseful account, Pratt’s encounters with his brethren ultimately affected not only his seniority in the Quorum of the Twelve but also had a lasting impact on LDS doctrine, policy, and organizational structure.

“There is not a man in the church that can preach better than Orson Pratt,” Brigham Young told the twelve apostles on another occasion. “It is music to hear him. But the trouble is, he will … preach false doctrine.”

Pratt responded that he was “not a man to make a confession of what I do not believe. I am not going to crawl to Brigham Young and act the hypocrite. I will be a free man,” he insisted. “It may cost me my fellowship, but I will stick to it. If I die tonight, I would say, O Lord God Almighty, I believe what I say.”

“You have been a mad stubborn mule,” Young replied. “[You] have taken a false position … It is [as] false as hell and you will not hear the last of it soon.”

Not infrequently, these two strong-willed, deeply religious men argued. Part of their difficulty was that they saw the world from opposing perspectives—Pratt’s a rational, independent-minded stance and Young’s a more intuitive and authoritarian position. “We have hitherto acted too much as machines … as to following the Spirit,” Pratt explained in a quorum meeting in 1847. “I will confess to my own shame [that] I have decided contrary to my own [judgment] many times. … I mean hereafter not to demean myself as to let my feelings run contrary to my own judgment.” He issued a warning to the other apostles: “When [President Young] says that the Spirit of the Lord says thus and so, I don’t consider [that] … all we should do is to say let it be so.”

For his part, Young quipped that Pratt exhibited the same “ignorance … as any philosopher,” telling him “it would be a great blessing to him to lay aside his books.” When Pratt appealed to logic, Young would say, “Oh dear, granny, what a long tail our puss has got.”

Ironically, Orson Pratt would have the last word both because Young preceded him in death and because several of Young’s teachings and policies had proven unpopular among the other apostles. One of Young’s counselors said shortly after the president’s death that “some of my brethren … even feel that in the promulgation of doctrine he [Young] took liberties beyond those to which he was legitimately entitled.” Meanwhile, Pratt continued to hold sway with some of his colleagues. His thoughtful—if ultra-literalistic—interpretations of scripture would also influence such later church leaders as Joseph Fielding Smith and Bruce R. McConkie.

Bergera’s nuanced approach avoids caricatures in favor of the many complexities of personalities and circumstances. It becomes clear that the conflict in which these men found themselves enmeshed had no easy, foreseeable resolution.

AUTHOR BIOGRAPHY
Gary James Bergera is managing director of the Smith-Pettit Foundation in Salt Lake City, former managing director of Signature Books, and former managing editor of Dialogue: A Journal of Mormon Thought. He is co-author of Brigham Young University: A House of Faith, editor of Line Upon Line: Essays on Mormon Doctrine, The Autobiography of B. H. Roberts, Statement of the LDS First Presidency, and companion volumes of Joseph Smith’s Quorum of the Anointed, 1842-1845, and The Nauvoo Endowment Companies, 1845-1846 (also co-editor) and On Desert Trails with Everett Ruess, and a contributing author in The Prophet Puzzle: Interpretive Essays on Joseph Smith, Religion, Feminism, and Freedom of Conscience: A Mormon/Humanist Dialogue, and The Search for Harmony: Essays on Science and Mormonism. He is also the recipient of a Best Article Award from the Mormon History Association.