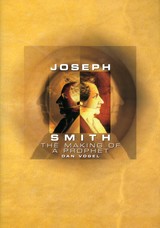 Rarely does a biographer capture the sense of being in a different time and mindset to the extent that readers feel they are reliving events through the eyes of the biographer’s subject. This is the skill of Dan Vogel—after twenty-five years of researching Joseph Smith’s life and publishing on such related issues as Seekerism, the Book of Mormon, views of Smith’s contemporaries about Indian origins, and the existing documents pertaining to Smith family experiences.

Vogel weaves together strands of evidence into a complete fabric including, among other aspects of Smith’s environment, the content of his daily dictation of scriputre and revelation—all contributing to a nearly complete view of what occurred on any given day in Smith’s lfie. The result is as much intellectual history as traditional biography. Readers will feel engaged in the dramatic, formative events in the prophet’s life against a backdrop of theology, local and national politics, Smith family dynamics, organizational issues, and interpersonal relations. One can form a mental picture, and many will find themselves carrying on an internal dialogue about the issues raised.

Vogel addresses the following broad themes:
1. The home that Joseph Smith was raised in was religiously divided. His mother’s family was orthodox and partly mystical; his father’s family tended toward rationalism and skepticism. Joseph’s maternal grandfather published an account of seeing a heavenly light and hearing Jesus’ voice. Joseph’s paternal grandfather promoted Thomas Paine’s skeptical critique of the Bible, The Age of Reason.

2. When Andrew Jackson was elected U.S. president in 1828, it was a key transitional period in American history. Jackson was a Mason and an advocate of secularism, which alarmed evangelical Protestants.

3. The Smith family experienced a series of financial setbacks and lost their farm in 1825. Joseph felt disinherited and saw no way of escape—no chance for his family to regain its former standing in the community.

4. Joseph found solace in religion. In the early 1820s, he had a powerful conversion experience and felt that Jesus had forgiven him of his sins. This inspired him to share the gospel message with others, particularly with his own family. About the same time, Smith found a talent for preaching and delivered “passable” Methodist sermons at a nearby revival.

5. Over time, Joseph became aware that people trusted him and that he could be an influence for good or ill, that even through nefarious means, God worked through him when his heart was right. He realized this when he led groups in search of Spanish treasure in New York and Pennsylvania. Although no treasure was found, the men sincerely believed that Smith had a spiritual gift and could see where casks of gold were hidden in the earth. This training ground in spiritual leadership was invaluable because the prophet learned how to create an environment for belief—one in which people could exercise faith and be converted to Christ through the sensible influence of the Spirit, all prior to the overarching work of restoring primitive Christianity.

AUTHOR BIOGRAPHY
Dan Vogel is the editor of Early Mormon Documents, a five-volume series that won Best Documentary awards from both the Mormon History Association and the John Whitmer Historical Association. He is the editor of The Word of God: Essays on Mormon Scripture; author of Indian Origins and the Book of Mormon; Joseph Smith: The Making of a Prophet and Religious Seekers and the Advent of Mormonism; and co-editor of American Apocrypha: Essays on the Book of Mormon. He is also a contributor to The Prophet Puzzle: Interpretive Essays on Joseph Smith and Differing Visions: Dissenters in Mormon History, among others. He has presented research papers at the annual Mormon History Association meetings, Sunstone Theological Symposium, and similar conferences. He is currently preparing a definitive edition of Joseph Smith’s multi-volume History of the Church. He and his wife live in Westerville, Ohio.