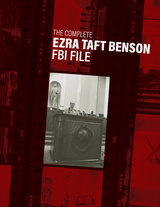 BUY FROM
The Complete Ezra Taft Benson FBI File
by Signature Books
Signature Books, 2020
eISBN: 978-1-56085-387-9
In November 1952, newly elected US president Dwight D. Eisenhower nominated Ezra Taft Benson (1899–1994) as his Secretary of Agriculture. This was an unusual move. For nearly a decade, Benson had been a sitting apostle in the Church of Jesus Christ of Latter-day Saints and had been for nearly a decade. Benson’s church duties occupied his full attention and energy.

Shortly after Benson’s nomination as agricultural secretary, the FBI began keeping a routine file on him, as they did other prominent Americans slated for Eisenhower’s cabinet. Filled with letters, memoranda, newspaper clippings, speeches, published writings, and other items, the file spans Benson’s eight-year tenure with the administration and well beyond. Some of the documents date past the Eisenhower era and even into Benson’s years as president of the LDS Church (1985–94).  The material not only deals with Benson’s life and political views, but his association with the John Birch Society, its leaders, and even threats made against his life in the late 1980s. The 570-page dossier is as much a revelation about the workings of the FBI as about the man they were investigating.