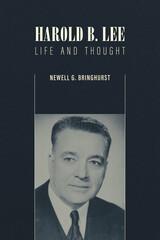 While Harold B. Lee served as president of the Church of Jesus Christ of Latter-day Saints for a mere one and half-years—among the shortest tenure of any church leader—his impact on the modern LDS Church remains among the most profound. Lee implemented the Church Welfare Program, which provided relief to suffering church members during the 1930s Great Depression and continues to impact the lives of church members today. As a high-ranking general authority from 1941 to 1973, he championed other innovations, the most important being Correlation. Lee acted in response to the church’s record growth and increased diversity to consolidate and streamline churchwide instruction and administration. As a teacher/mentor, he promoted conservative church doctrine and practice, which influenced a generation of church leaders, including future presidents Spencer W. Kimball, Ezra Taft Benson, Howard W. Hunter, Gordon B. Hinckley, and Thomas S. Monson. Noted historian Newell G. Bringhurst succinctly narrates the major, defining events in Lee’s remarkable life, while highlighting Lee’s important, lasting contributions. This is the first volume in Signature’s new Brief Mormon Lives series.
AUTHOR BIOGRAPHY
Newell G. Bringhurst is professor emeritus of history and political science at College of the Sequoias in Visalia, California. He has served as president of both the Mormon History Association and the John Whitmer Historical Association. He is the author/editor of thirteen books, including Saints, Slaves, and Blacks: The Changing Place of Black People within Mormonism; Brigham Young and the Expanding American Frontier; and Fawn McKay Brodie: A Biographer’s Life. He and his wife, Mary Ann, are the parents of one daughter, Laura (son-in-law, David), and grandparents to two grandsons. He is the 2021 recipient of the Leonard J. Arrington Award for lifetime achievement from the Mormon History Association.