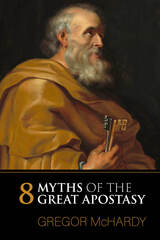 Latter-day Saints believe that, following the resurrection of Jesus Christ and the death of the original apostles, a Great Apostasy occurred that took God’s authorized servants from the earth and with them, direct revelation from God. This forced people to fend for themselves spiritually, which only resulted in lost truths, false doctrines, and a state of confusion that could only be remedied by a restoration. This, Mormons believe, was initiated by Joseph Smith, God’s chosen mouthpiece for this new era. But many church members’ understanding of this apostasy is tinged with tainted suppositions and misunderstandings. Statements such as “the priesthood was taken from the earth” and “the gospel was shattered into many pieces” are not only inaccurate but are curtly dismissive of fellow Christians. Gregor McHardy examines the fate of the apostles, the actual dissipation of authority following their deaths, the gradual onset of changed doctrines, and similar topics.

McHardy’s careful, astute examination leads to a realization that Jesus’s prediction that “the gates of hell shall not prevail” against the organization Peter led was accurate. With that understanding, today’s Latter-day Saints can craft more positive, engaging statements about the nature and meaning of their Restoration.
AUTHOR BIOGRAPHY
Gregor McHardy is a resident professor of computer science at Scottsdale Community College in Arizona and holds an MA in history from American Public University. McHardy has traveled extensively, visiting forty-eight of the Unites States as well as thirty-two countries. Over the past dozen years, he has undertaken to read the Book of Mormon in many languages, including Greek, his tenth. He and his wife, Lorri, are graduates of Brigham Young University and are the parents of six children.