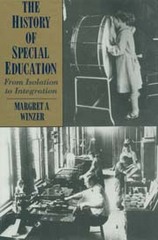 This comprehensive volume examines the facts, characters, and events that shaped this field in Western Europe, Canada, and the United States. From the first efforts to teach disabled people in early Christian and Medieval eras to such current mandates as Public Law 94-142, this study breaks new ground in assessing the development of special education as a formal discipline.

The History of Special Education presents a four-part narrative that traces its emergence in fascinating detail from 16th-century Spain through the Age of Enlightenment in 17th-century France and England to 18th-century issues in Europe and North America of placement, curriculum, and early intervention. The status of teachers in the 19th century and social trends and the movement toward integration in 20th century programs are considered as well.
AUTHOR BIOGRAPHY