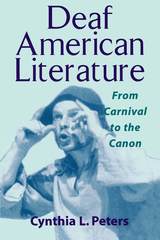 "The moment when a society must contend with a powerful language other than its own is a decisive point in its evolution. This moment is occurring now in American society." Cynthia Peters explains precisely how ASL literature achieved this moment, tracing its past and predicting its future in this trailblazing study.

Peters connects ASL literature to the literary canon with the archetypal notion of carnival as "the counterculture of the dominated." Throughout history carnivals have been opportunities for the "low," disenfranchised elements of society to displace their "high" counterparts. Citing the Deaf community's long tradition of "literary nights" and festivals like Deaf Way, Peters recognizes similar forces at work in the propagation of ASL literature. The agents of this movement, Deaf artists and ASL performers--"Tricksters," as Peters calls them--jump between the two cultures and languages, creating as synthesis that robs English of its literary content and raises ASL to an art form.

Peters applies her analysis to the craft's landmark works, including Douglas Bullard's novel Islay and Ben Bahan's video-recorded narrative Bird of a Different Feather. Deaf American Literature, the only work of its kind, is its own seminal moment in the emerging discipline of ASL literary criticism.