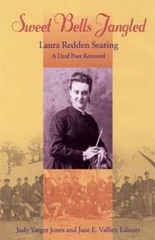 The Fourth Volume in the Gallaudet Classics in Deaf Studies Series

Laura Redden Searing (1839-1923) defied critics of the time by establishing herself as a successful poet, a poet who was deaf. She began writing verse at the Missouri School for the Deaf in 1858, and, under the pseudonym Howard Glyndon, soon found herself catapulted into national prominence by her patriotic Civil War poems. Abraham Lincoln himself bought her books, the most critically acclaimed being Idylls of Battle and Poems of the Rebellion, published in 1864. Her poem "Belle Missouri" became the song of the Missouri Volunteers, and she was sent by the St. Louis Republican newspaper to Washington as a war correspondent.

Despite her success, detractors decried her poetry simply because she was deaf, asking how she could know anything of rhyme, rhythm, or musical composition. She quieted them with the simple elegance of her words and the sophistication of her allegorical themes. Readers can enjoy her work again in this volume, which features more than 70 of her finest poems. They also will learn her feelings about the constraints imposed on 19th-century women in her epic narrative of misunderstanding and lost love "Sweet Bells Jangled:"

Out of sight of the heated land

Over the breezy sea;

Into the reach of the solemn mist

Her restoration will be an event welcomed by poetry aficionados everywhere.

Judy Yaeger Jones is an independent scholar and educational consultant in multicultural, disability, and women's history in St. Paul, MN.

Jane E. Vallier is Adjunct Assistant Professor in the Department of English at Iowa State University, Ames, IA.
TABLE OF CONTENTS
Contents
Preface
Acknowledgments
A Brief Biography of Laura Redden Searing Judy Yaeger Jones
Laura Redden Searing: A Restored Voice in American Poetry
The Red, White, and Blue
In Time of War
Left on the Battle-Field
To the Earnest Thinkers
De Profundis
The Story of Sumter
Watch-Night
The Legend of Our Victories
The Latest War News
Baker
The Snow in October
An Appeal
The Graves of Gettysburg
The Snow at Fredericksburg
The President’s Proclamation
A Greeting for a New Year
The Volunteer’s Return
My Absent Soldier
Butler’s Black Brigade
The Quiet Man
My Story
The Last Poem
A Farewell
Wilhelmine
Dear Mother
Thirty Years
To John Greenleaf Whittier
Thomas Hopkins Gallaudet
The Unveiling of the Fountain
Little Footprints
Guessing
Birthrights
Prelibatory
Sweet Bells Jangled
To My Rightful Readers
My Past
The Home of the Gentians
A Rhyme of the Maple Tree
Troth-Plight
One Kiss Before We Part
Entre Nous
Two Songs of One Singer
Afraid
Et Tu?
You and I!
Only Her Hand
Amy at the Window
Ruse de Guerre
A Woman’s Complaint
Violets in Autumn
Which Is Best?
Breton Peasants
A Love-Song of Sorrento
A Sicilian Midnight Madrigal
Mazzini
At the Grave of Keats
Broken Off
Disarmed
An Empty Nest
With White Hands
But Once
At Dawn
A Woman’s Questioning
Ten Years of Silence
Exorcism
Summer Morning Delights
Corrinna Confesses
The Confessional
A Nineteenth-Century Fashion
Broken Toys
Half and Half
At Odds
Snow-flowers
Seniority
At Eventide
Væ Patriæ
December in California
The Hills of Santa Cruz
The Realm of Singing