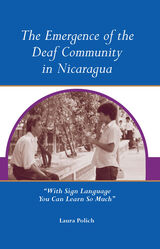 The sudden discovery of Nicaraguan Sign Language (NSL) enthralled scholars worldwide who hoped to witness the evolution of a new language. But controversy erupted regarding the validity of NSL as a genuinely spontaneous language created by young children. Laura Polich’s fascinating book recounts her nine-year study of the Deaf community in Nicaragua and her findings about its formation and that of NSL in its wake.

Polich crafted The Emergence of the Deaf Community in Nicaragua from her copious research in Nicaragua’s National Archives, field observations of deaf pupils in 20 special education schools, polls of the teachers for deaf children about their education and knowledge of deafness, a survey of 225 deaf individuals about their backgrounds and living conditions, and interviews with the oldest members of the National Nicaraguan Association of the Deaf.

Polich found that the use of a “standardized” sign language in Nicaragua did not emerge until there was a community of users meeting on a regular basis, especially beyond childhood. The adoption of NSL did not happen suddenly, but took many years and was fed by multiple influences. She also discovered the process that deaf adolescents used to attain their social agency, which gained them recognition by the larger Nicaraguan hearing society. Her book illustrates tremendous changes during the past 60 years, and the truth in one deaf Nicaraguan’s declaration, “With sign language you can learn so much.”