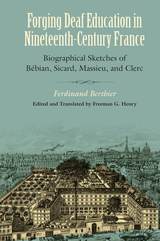 In 1811, deaf student Ferdinand Berthier commenced his education at the National Institute for the Deaf in Paris under its director Abbé Sicard and his teachers Auguste Bébian, Jean Massieu, and Laurent Clerc. Their tutelage eventually led Berthier to join the faculty at the Institute and become a life-long proponent of sign language and Deaf culture. Berthier earned fame for instituting the famous silent banquets in Paris in 1834. He also learned to advance his agenda by writing biographies of important figures who advocated sign over oralism to educate deaf French students. Forging Deaf Education in Nineteenth-Century France offers the first translation of Berthier’s biographical sketches of the four men above who influenced him most.

Berthier wrote first about Bébian in 1839, timed to advocate sign language for teaching deaf students after the death of the pro-oralism Institute Director Désiré Ordinaire. Berthier extolled Bébian’s linguistic acumen and his educational philosophy. In later sketches, however, he described Sicard and Massieu in positive terms, but also criticized them for supporting “methodical” signing that conformed to spoken language conventions.  In contrast, he lauded  Clerc in his portrayal for using “natural” signing to teach deaf students. The clarity of these translations will introduce a brand new audience to Berthier’s biographies shaped by his unswerving beliefs about Deaf French education.

Ferdinand Berthier (1803–1886) was President of the Société Centrale des Sourds-Muets, Dean of the Royal Deaf Institute of Paris, and a member of the Historical Institute of France.

Freeman G. Henry is Professor of French and Comparative Literature at the University of South Carolina, Columbia, SC.