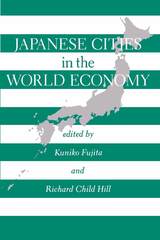 Throughout the essays that describe individual cities, contributors provide commentary on each city's twentieth-century history and functional relations with other cities and focus on the dynamic linkage between global relations and local activities. They examine the role of government—central, prefectural, and local—in the restructuring of Japanese industrial and urban life. One essay is devoted to the urbanization process in pre-World War II Japan; another considers urban planning on the western Pacific Rim. This is the first book that analyzes how the economic transformation of Japan has restructured Japanese cities and how urban and regional development policies have kept pace with (and in some ways effected) changes in the economy.

Richard Child Hill is Professor of Sociology and Urban Affairs at Michigan State University and co-author of Detroit: Race and Uneven Development (Temple).

About the Contributors
Index