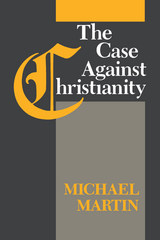 In this systematic philosophical critique of the major tenets of Christianity, Michael Martin examines the semantic and epistemological bases of religious claims and beliefs. Beginning with a comparison and evaluation of the Apostles’ Creed, the Niceno-Chalcedonian Creed, and the Athanasian Creed, Martin discusses the principal theological, historical, and eschatological assumptions of Christianity. These include the historicity of Jesus, the Incarnation, the Second Coming, the Virgin Birth, the Resurrection, Salvation through faith in Jesus, and Jesus as a model of ethical behavior.

Until now, an adequately convincing criticism of Christianity did not exist. Martin’s use of historical evidence, textual analysis, and interpretations by philosophers and theologians provides the strongest case made to date against the rational justification of Christian doctrines.

AUTHOR BIOGRAPHY
Michael Martin, Professor of Philosophy at Boston University, is the author of The Legal Philosophy of H.L.A. Hart and Atheism: A Philosophical Justification (both from Temple).
REVIEWS

"Martin has said something fresh and fruitful that theologians and philosophers of religion simply cannot afford to ignore....Every serious student of Christian doctrine would do well to spend time on Martin's insightful chapters." —Free Inquiry

"A thorough, logical examination of the major tenants of Christianity by a professional philosopher (not a theologian).... [This] is the best book for the intelligent reader that examines the case for and against Christianity.... The book is must reading for all who discuss (or defend) Christianity from a critical point of view." —American Rationalist

"An insightful and provocative rational analysis of the major doctrinal claims of Christianity.... While a creative critique in its own right, this work is in the tradition of Friedrich Nietzsche, Bertrand Russell, Paul Kurtz, and Edmund Cohen among others...." —Choice