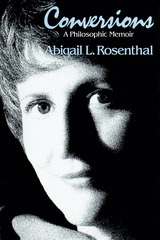 Conversions: A Philosophic Memoir belongs to the tradition of Augustine and Rousseau: the "confession" of a life that is a quest for truth. It is in large part the story of two major episodes from Abigail Rosenthal's early adulthood, bought putting personal identity dramatically at risk.

As a young Fulbright scholar in Paris, Rosenthal met and entered reluctantly into a love affair with a young Greek communist philosopher who believed (along with many Parisian intellectuals of that era) that force and deception were justified by a utopian vision of world history. In the inevitable collision of values--between Jew and Greek, liberal and revolutionary, theist and atheist, woman and man in unequal truggle--they separated.

Suffering in the aftermath, she at last turned for help to a young African American woman graduate student whom she met in London. This woman's Gnostic Christian rejection of personal and cultural history eventually left Rosenthal without defense against her new mentor's remarkable use of charisma, ridicule, and moralistic reproach to usurp the author's life story. These stratagems of mind control reached a climactic phase in Portugal, where the two went--Rosenthal to paint the other woman to write--in what would turn out to be the terrifying reverse of a summer idyll. With the U.S. State Department, the Portuguese PolicÃ­a Internacional devised an extraordinary rescue.

This arresting narrative, which deals with relations between blacks and whites, Christians and Jews, and men and women, delivers its own philosophic theory of the individual in history.

"Rosenthal's work belongs to the classical tradition of the life that is a quest for truth. Pertinent to the genre is its relation to the tradition of Augustine and Rousseau. She is also anti-Augustinian in that her depiction of history is oriented by the standpoint of Judaism rather than Christianity and is bound up with a quest for the historical realization of justice.

"The first of the two episodes she recounts is a love affair (entered into reluctantly) with a young Greek communist philosopher whom she met in Paris while a Fulbright student in the late 1950s. The second, darker, episode is a later Pygmalion-like involvement with an African American woman graduate student whom Rosenthal first encountered in London, where she worked on a Hegel dissertation, and with whom she entered into a life-threatening reverse, as it were, idyll in a small Portuguese village. The saga is replete with details that could have been dreamt up by Le Carre: Salazar's Portugal, its intelligence arm, the U.S. State Department. Her depiction of these complex relations raises in unsettling ways the question of what counts as freedom, as racism, as terror.

"Her in-passing observations about analytic philosophy, existentialism, and postmodernism (and I am far from being in her camp on many issues) are worth the price of the book. Hers is an original philosophic mind."