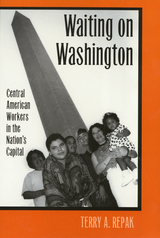 In an analysis of recent immigration patterns in Washington, D.C., Terry A. Repak documents the unusual predominance of women among Central American immigrants. Two thirds of the arriving immigrants in earlier decades have been women, many of them recruited by international diplomats and U.S. government employees to work as housekeepers and nannies. Repak considers the labor force participation patterns for women compared to men, the effect of immigration laws—particularly the IRCA's uneven impact on women versus men—and the profound adjustments in gender roles and identities that accompany migration.

Showing an extraordinary amount of autonomy, most of these immigrant women decided to migrate without consulting either fathers or partners, and they gained even greater independence once settled. Repak plots the career trajectories of numerous Central American immigrant women and men to illustrate the array of the women's responses, gender differences in the migration and assimilation experience, the availability of work, and the possibility for upward mobility and higher wages. Providing social, economic and political context, she looks at the conditions that set the stage for this migration, including the rapid expansion of service jobs in the 1960s and 1970s in Washington, D. C. and the political strife in such Central American countries as war-torn El Salvador, Nicaragua, and Guatemala.

Terry A. Repak holds a Ph.D. in Liberal Arts from Emory University and is a freelance writer whose publications include Edward Kennedy: The Myth of Leadership (with Murray B. Levin).