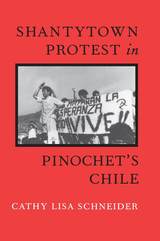 "Shantytown Protest is one of the richest and most interesting accounts of popular mobilizations in urban Latin America that I have ever seen. The description of popular resistance under conditions of extreme material scarcity and ruthless military repression is fascinating. The book is a major contribution to the research literatures on Third World urbanization and Latin America politics."

In 1973 armed forces launched a violent attack against the Chilean presidential palace and Santiago's slums and shantytowns. For ten years, only the Catholic Church was able to defy the military regime. Then, in 1983, students, workers, and shantytown residents stormed the streets demanding the resignation of Augusto Pinochet. The protests raged for three years and, in 1989, democratic elections were held. The following year a new civilian government took office.

Cathy Lisa Schneider examines this democratic transition from the bottom up, looking at the struggles of poor people to create and sustain organized resistance, to risk their lives to fight tyranny. Both an oral history based on over a hundred interviews collected in shantytowns and a comparative sociological study that explores political differences among different shantytowns in Santiago, this book analyzes the context in which the urban poor make choices about their lives, and the political histories that shape their vision.

"With an anthropologist's sympathetic ear, an activist's reasoned zeal, a social scientist's theoretical sensibility, and a journalist's deft pen, Cathy Schneider has brought to life Chile's burgeoning shantytown politics of the 1980s. From the overthrow of Allende to the fall of Pinochet, she chronicles and explains the swirling of popular struggles. Read her and learn."

"Cathy Schneider's book shows how democratic nation-building depends not only on how elites maneuver, but crucially on how ordinary citizens mobilize on behalf of democracy. She has successfully brought together Latin American studies and social science, the human drama of the shantytown protests with the analytical perspectives of social movement studies."