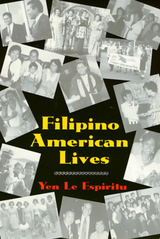 Men and women, old and young, middle and working class, first and second generation, all openly discuss their changing sense of identity, the effects of generational and cultural differences on their families, and the role of community involvement in their lives. Pre- and post-1965 immigrants share their experiences, from the working students who came before WWII, to the manongs in the field, to the stewards and officers in the U.S. Navy, to the "brain drain" professionals, to the Filipinos born and raised in the United States.

As Yen Le Espiritu writes in the Introduction, "each of the narratives reveals ways in which Filipino American identity has been and continues to be shaped by a colonial history and a white-dominated culture. It is through recognizing how profoundly race has affected their lives that Filipino Americans forge their ethnic identities—identities that challenge stereotypes and undermine practices of cultural domination."

Yen Le Espiritu is Associate Professor in the Department of Ethnic Studies at the University of California, San Diego, and the author of Asian American Panethnicity: Bridging Institutions and Identities (Temple).

Preface
Acknowledgments
Introduction: Filipino Settlements in the United States
1. "We Have to Show the Americans that We Can Be as Good as Anybody" – A. B. Santos and Juanita Santos
2. "I Was Used to the American Way of Life" – Ruth Abad
3. "Sometimes, I Am Not Sure What It Means to Be an American" – Connie Tirona
4. "My Dream Is to Be Able to Give Something Back to My Country and My People" – Luz Latus
5. "My Experience Is Atypical" – Paz Jensen
6. "I Sacrificed My Five-Year College Education to Become a Steward" – Leo Sicat
7. "I Only Finished First Grade" – Nemesia Cortez
8. "International Medical Graduates Are Tested Every Step of the Way" – Edgar Gamboa
9. "PASACAT Became My Whole Life" – Anamaria Labao Cabato
10. "I Knew that I Wanted to Be a Naval Officer" – Daniel Gruta
11. "I Offended Many Filipinos Because I Was an FOB" – Dario Villa
12. "I Could Not Cope with Life" – Joey Laguda
13. "Everybody Seemed to Be Either White or Black, a Full Race" – Lisa Graham
Bibliography