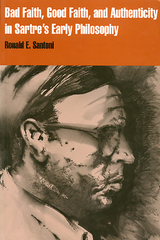 From the beginning to the end of his philosophizing, Sartre appears to have been concerned with "bad faith"—our "natural" disposition to flee from our freedom and to lie to ourselves. Virtually no aspect of his monumental system has generated more attention. Yet bad faith has been plagued by misinterpretation and misunderstanding. At the same time, Sartre's correlative concepts of "good faith" and "authenticity" have suffered neglect or insufficient attention, or been confused and wrongly identified by Sartre scholars, even by Sartre himself.

Ronald E. Santoni takes on the challenge of distinguishing these concepts, and of showing whether either or both existential "attitudes" afford deliverance from the hell of Sartre's bad faith. He offers the first fill-scale analysis, reconstruction, and differentiation of these ways of existing as they develop in Sartre's early works (1937-1947).

Although he attempts to redeem Sartre's slighted concept of good faith, Santoni warns that it must not be viewed interchangeably with authenticity. Further, in one of the earliest and most sustained studies of Sartre's Notebooks for an Ethics available in English, Santoni shows how Sartre's posthumously published notes for an "ethics of Salvation" confirm his differentiation and argument. The way out of Sartrean hell, Santoni insists, is authenticity—living "with fidelity" to our unjustifiable freedom and assuming responsibility for it.

Ronald E. Santoni is Maria Theresa Barney Professor of Philosophy at Denison University in Ohio. He is a Life Member of Clare Hall, Cambridge University, and an Associate Fellow of Berkeley College, Yale University, whose published work includes over 100 articles, reviews, and commentaries. He is also co-editor of Social and Political Philosophy and editor of Religious Language and the Problem of Religious Knowledge.

Preface
Introduction
1. Bad Faith and Sincerity: Does Sartre's Analysis Rest on a Mistake?
2. Bad Faith and "Lying to Oneself"
3. The Cynicism of Sartre's "Bad Faith"
4. Good Faith: Can It Be Salvaged?
5. Sartre's Concept of "Authenticity"
6. Authenticity and Good Faith: An Analytic Differentiation
7. The "Unveiling" of Authentic Existence: Corroborating My Differentiation through Sartre's Notebooks
Notes
Index