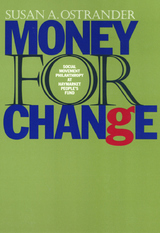 Charitable foundations are being called  upon to operate in more pen and democratic ways and to involve a more diverse constituency. This unprecedented study details the inner workings of a democratically organized philanthropy, where funding decisions are made by community activists. Susan A. Ostrander spent two years doing intensive field research at the Haymarket People's Fund -- a small, Boston-based foundation. Based on a philosophy of raising and giving away money called "Change, Not Charity," the Fund makes grants to local grassroots social change organizations. The world of social movement funding comes alive with Ostrander's descriptions of grantmaking and policy meetings, donor events, and the day-to-day work of the Fund staff.

Within this fascinating behind-the-scenes account, Ostrander argues that the "social relations of philanthropy" are more important and more varied than previously understood. Written at a time when Haymarket was dealing with crisis, this book tells a story of organizational change as the Fund moved from an informal collective to a more formal structure; it is also the story of a struggle to build a multi-race, multi-class, gender-equal organization. Ostrander details these ongoing struggles and addresses the larger issue of how fundraising can itself be a kind of social movement organizing among the progressive  people with wealth who continue to be Haymarket's main donors.
AUTHOR BIOGRAPHY
Susan A. Ostrander is Professor of Sociology at Tufts University and author of Women of the Upper Class (Temple).
TABLE OF CONTENTS