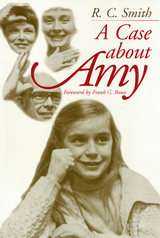 The Rowley family's struggle began when Amy entered kindergarten and culminated five years later in a pivotal decision by the U.S. Supreme Court. In effect, the Court majority concluded that the Individuals with Disabilities Education Act did not mandate equal opportunity for children with disabilities in classes with typical children; a disappointing decision for disability advocates.

The Supreme Court decided that schools were required only to provide enough help for children with disabilities to pass from grade to grade. The Court reversed the lower courts' rulings, which had granted Amy an interpreter, setting a precedent that could affect the quality of education for all individuals with disabilities.

From the time Amy entered kindergarten in Peekskill, New York, her parents battled with school officials to get a sign language interpreter in the classroom. Nancy and Clifford Rowley, also deaf, struggled with officials for their own right to a communications process in which they could fully participate. Stuck in limbo was a bright, inquisitive child, forced to rely on partial lipreading of rapid classroom instruction and interaction, and sound amplifiers that were often broken and always cumbersome.

R.C. Smith chronicles the Rowley family's dealings with school boards, lawyers, teachers, expert consultants, advocates, and supporters, and their staunch determination to get through the exhaustive process of presenting the case time after time to school adjudicative bodies and finally the federal courts. The author also documents his own "coming to awareness" about how the "able" see the "disabled."

In the series Health, Society, and Policy, edited by Sheryl Ruzek and Irving Kenneth Zola.

For 25 years, R. C. Smith was a Senior Associate at MDC, Inc., in Chapel Hill, North Carolina, a nonprofit organization dedicated to creative approaches for bettering the lives of disadvantaged people. Also a former columnist, editor, and reporter for several southern newspapers and a part-time journalism instructor at the University of North Carolina, Chapel Hill, he is now a freelance writer based in Jamestown.

Foreword – Frank G. Bowe
Acknowledgments
Legal Chronology
1. Time Tears Us Apart
2. The Battle Joined
3. Like Light Pouring Down over Me
4. Vindication by Trial
5. A Case about Amy
6. A "Voice" in the Classroom
7. "Full Potential" in the Court
8. Maybe It Wouldn't Happen Today
9. What Amy Hears
10. A Matter of Growth
11. Amy in Oz
12. Equal Opportunity Writ Large
13. Is It Really Money?
14. Amy Remembering
15. Not Quite Human
16. Struggling and Succeeding
17. If Heaven Isn't Accessible, God Is in Trouble
18. To Be Who We Are
Index