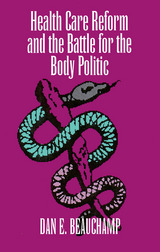 "Dan Beauchamp's important book melds a personal odyssey, an abiding, passionate commitment to one version of comprehensive health reform, and highly disciplined political analysis. His years in the Cuomo Administration provide him with rich insight into how that scion of liberalism inched toward, but ultimately shied away from, major health reform in the Empire State. His provocative assessment of the missed opportunities represented by the Clinton health plan also deserves the attention of any serious student of health politics and policy."

While most studies of health care reform have focused on solving the market's failure, controlling costs, or providing universal access, Dan E. Beauchamp adeptly discusses health care reform as a strategy for dealing with the failures of politics--not just the failures of the health care market. As the former Deputy Commissioner for Policy and Planning for the New York State Department of Health, Beauchamp presents a revelatory first-person narrative about his work to develop a universal health care and insurance plan for New York State. His enlightening personal account includes discussions of his efforts to develop a national model of the New York plan for Mario Cuomo (during the period when the governor considered running for the Democratic nomination for president), and his perceptive critique of the failed Clinton plan for reform.

Beauchamp gets beyond topics like global budgets, rate-setting, and managed competition to outline the idea of health plans as a means for the public to come together in a way that will change forever the way we think about health care, which he calls "the battle for the body politic." A large part of engaging in the "battle," he argues, involves addressing and resolving racial and class divisions that have always underscored America's political reality. Ultimately, Beauchamp argues for a reform that would promote health and social equality, one that would change and strengthen our social awareness of health care as a common good.

"Dan Beauchamp is a singular and important voice in the ongoing health care debate. Instead of focusing on the technical details of health reform, he spins a compelling personal narrative, entices the reader into the truly important questions: How do health plans work politically? How can they change the way we think about health, health care and ourselves as a country? While economists focus on financing schemes, and bioethicists search for underlying values, Beauchamp probes how a health care system shapes our politics and affects our experience of who we are as Americans. His book is exceedingly valuable; it reveals just how much is at stake in health care reform."