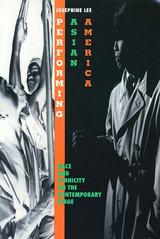 At a time when Asian American theater is enjoying a measure of growth and success, Josephine Lee tells us about the complex social and political issues depicted by Asian American playwrights. By looking at performances and dramatic texts, Lee argues that playwrights produce a different conception of "Asian America" in accordance with their unique set of sensibilities.

For instance, some Asian American playwrights critique the separation of issues of race and ethnicity from those of economics and class, or they see ethnic identity as a  voluntary choice of lifestyle rather than an impetus for concerted political action. Others deal with the problem of cultural stereotypes and how to reappropriate their power. Lee is attuned to the complexities and contradictions of such performances, and her trenchant thinking about the criticisms lobbed at Asian American playwrights -- for their choices in form, perpetuation of stereotype, or apparent sexism or homophobia -- leads her to question how the presentation of Asian American identity in the theater parallels problems and possibilities of identity offstage as well.

"One of the first major studies of Asian American drama, Lee's Performing Asian America serves as a cleanly argued and theoretically engaging study of the construction and performance of identity both onstage and off."
—MELUS

1      Critical Strategies for Reading Asian American Drama
2      The Asian American Spectator and the Politics of Realism
3      The Chinaman's Unmanly Grief
4      The Seduction of the Stereotype
5      Acts of Exclusion: Asian American History Plays
6      Asian American Doubles and the Soul Under Capitalism
7      Staging "Passing" on the Borders of the Body