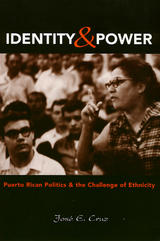 On the surface, identity politics appears to promote polarization. To the contrary, political scientist Jose E. Cruz argues that, instead, fragmentation and instability are more likely to occur only when the differences are ignored and nonethnic strategies are employed. Cruz illustrates his claim by focusing on one group of Puerto Ricans and how they mobilized to demand accountability from political leaders in Hartford, Connecticut.

The activities of the Puerto Rican Political Action Committee from 1983 to 1991 illustrate the power of ethnic mobilization and strategy in an urban setting. Cruz examines their insistence on their right to be included in the political process in the context of both a typical mid-sized American city and the unique attributes of Hartford's predominantly white-collar population. At the same time, this study acknowledges the limitations of the exercise of such power in the political process.

Through extensive interviews Cruz brings to light the variety of ways in which politicians and political activists themselves view their own activities and achievements. This group of Puerto Rican activists attempted to penetrate the power structure of Hartford. Though their success was limited, their work constitutes a springboard for further change.
AUTHOR BIOGRAPHY
Jose E. Cruz is Assistant Professor of Political Science, State University of New York at Albany.
TABLE OF CONTENTS

2   Hartford: The City and Its Politics

3   Puerto Ricans in Hartford: From Settlement to Collective Behavior

4   From Collective Behavior to Brokered Representation

5   From Brokered Representation to Political Mobilization

8   Puerto Rican Politics and the Challenge of Ethnicity