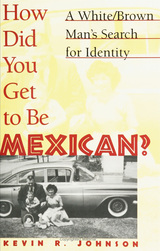 This compelling account of racial identity takes a close look at the question "Who is a Latino?" and determines where persons of mixed Latino-Anglo heritage fit into the racial dynamics of the United States. The son of a Mexican American mother and an Anglo father, Kevin Johnson has spent his life in the borderlands between racial identities. In this insightful book, he uses his experiences as a mixed Latino-Anglo to examine issues of diversity, assimilation, race relations, and affirmative action in contemporary America.
AUTHOR BIOGRAPHY
Kevin R. Johnson is Professor of Law at the University of California, Davis. He is author of a number of law review articles on civil procedure, civil rights, race relations, immigration law, and refugee law.
TABLE OF CONTENTS

3    My Mother: One Assimilation Story

4    My Father: Planting the Seeds of a Racial Consciousness

11  What Does It All Mean for Race Relations in the United States?